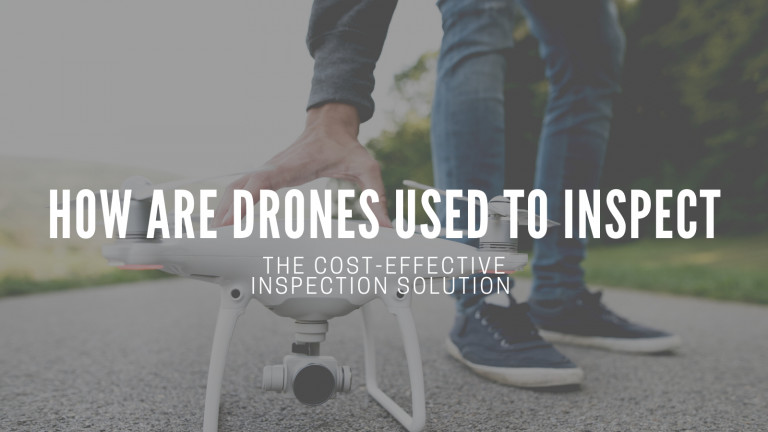 Drone inspections are a cost-effective and safe way to inspect difficult to access locations. Aerial photography is one of the most popular applications for drone technology, but drones can also be used to capture video footage of inaccessible areas which can, in turn, be used in many different industries.

This blog post will explore what a drone inspection is and answer the question we are often asked: ‘How are drones used to inspect?”.

Each industry has its own set of dangers and risks that can be reduced with the use of drones. Aerial photography is one way to survey a building for damage or take detailed photographs around any difficult-to-access areas without endangering anyone on site, while in other industries like construction, aerial photos are used as part of an inspection report.

Drone inspections are being utilised more and more rapidly over conventional inspection methods in many fields due to both the cost savings and the safety benefits amongst others.

Primarily used for visual inspections, the advances in technology over recent years mean that rather than simply taking photographs, drones (or UAV’s) can now be fitted with other forms of data capture and remote sensing equipment enabling them to undertake different forms of inspections across a wide range of fields.

Drones are capable of taking high-resolution images and capturing real-time footage with the use of cameras, infrared sensors, lasers and other scanning equipment. Data can be stored for later analysis and used to assess maintenance issues, detect structural damage, and monitor the efficiency of power generation equipment.

The use of drones for inspections reduces the risk to people’s safety, as they can be operated remotely and safely from ground-level, meaning that inspections are safer for workers whilst also being less intrusive to staff and customers when taking place around their premises.

A useful tool, particularly in the inspection of structures that are difficult to reach by traditional means, drones can be used both indoors and outdoors. Tall structures that would ordinarily be inaccessible to their height can be easily inspected by drones without the safety risks presented by conventional inspection methods.

Some examples of the different ways drones can be used during a remote inspection are:

To capture still images of an area, this is especially useful for identifying structural damage or other changes that may not have been visible from ground level.

Thermal Imaging will detect where heat sources and hot spots are in buildings to identify potential fire risks. This technology can also aid in the detection of defects such as leaks during roof surveys.

Aerial Mapping can be used to create a detailed map of an area, could then be utilised in the event of natural disasters such as earthquakes or floods.

In recent years, drone inspections have been widely adopted by businesses across the world with councils and government organisations using drones for surveying and inspecting properties within their region. These aerial inspections allow for an overview of structures such as roofs or buildings in order to identify possible defects that may not be visible from ground level. They can also quickly inspect large expanses of land to find things that might be hidden from view by human inspectors.

If you need assistance or advice on how your company might benefit from using drones as part of your inspections, give us a call or use our 'Live Chat' feature and we’ll do our best to help.