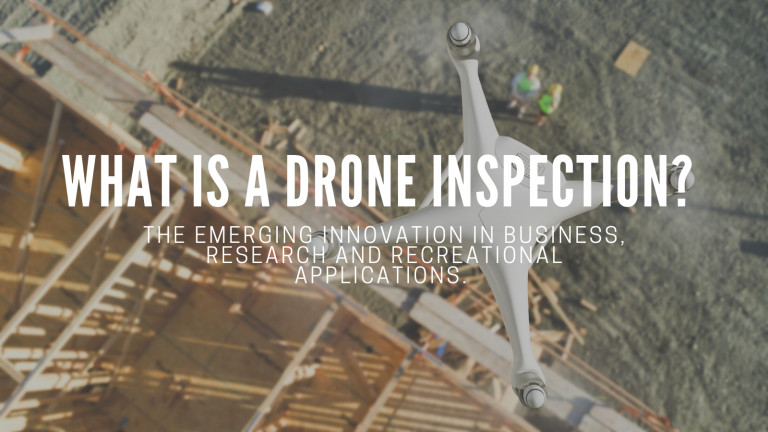 The emerging innovation for business, research and recreational applications.

The employment of drone technology is rapidly increasing across a broad spectrum of business, research and recreational applications.

Over recent years drone usage has expanded to include a variety of different tasks,  including but not limited to aerial photography and videography (or cinematography),  emergency response services, search-and-rescue operations and, as we will be discussing in this article; drones are an emerging innovation in the field of inspections.

But What Exactly IS a Drone Inspection?

It's in this capacity that drones are being used to inspect buildings, bridges and other structures in a variety of fields and industries where visual inspections are necessary,  particularly for maintenance purposes.

There are obviously many advantages of utilising drones to carry out visual inspections over traditional, manual inspection methods; inspector safety being top of the list. In applications where surveys at elevated heights may ordinarily require an inspection crew to climb scaffolding, ropes or rigs, such as on bridges, tall buildings or wind turbines, a  drone can collect comprehensive visual data, capturing images of a structure from multiple angles or distances without any danger to the inspector.

In addition to the safety benefits, due to their portability and relatively low cost of operation, drones offer several other significant advantages when it comes time for an inspection in comparison with conventional methods.

Many manual maintenance inspections are not only dangerous but also costly and time-consuming. Drones not only greatly reduce the risk to workers, but also speed up data collection and analysis.

By using a drone, many industries that would ordinarily need to shut down operations for an inspection to take place can now continue with production unhindered, meaning huge reductions in overall inspection costs.

Due to their size, drones can easily access hard-to-reach areas that would either prove extremely costly or maybe even impossible for a manned inspection. Indoor and off-shore inspections are also possible, again with massively decreased cost implications.

While UAV’s can be used in many applications and for many types of inspections, they are used mainly as a visual inspection tool. Some of the areas where drones are being  used as the inspection method of choice include:

As well as the obvious advantages of eliminating the need for scaffolding or ladders and reducing the associated risks for surveyors, drones offer further benefits for roof inspections. By utilising the latest imaging technology, drones are often able to detect defects that may be missed by humans during conventional surveys. Many drones are equipped with thermal imaging cameras that make the detection of things like water leaks a much simpler and more effective process.

Drones are becoming an increasingly popular option for inspecting large offshore structures such as oil rigs and wind turbines. Again, there are many advantages for these applications, not least the fact that they are so much quicker than manned inspections.  On sites such as wind farms, drones can carry out in-depth inspections of large numbers of wind turbines at the same time it would take to survey just one or two turbines using conventional methods. Drones also enable the inspectors to remain safely onshore rather than having to conduct in-person ‘at at height’ visual surveys.

Drones are also proving to be a very valuable and cost-effective tool for conducting safety inspections.

On construction sites, for example, they can provide an overview of site activity by capturing high-resolution images from above, identifying any potential obstacles and risks.

Increasingly, drones are being used to inspect structures and large-scale construction projects, providing a unique perspective that allows inspectors to analyse and assess for possible problems before any major damage can occur. Their ability to detect any potential safety hazards that may not be visible from a distance such as corrosion under bridges and around dams makes drones the perfect choice for detailed safety surveys.