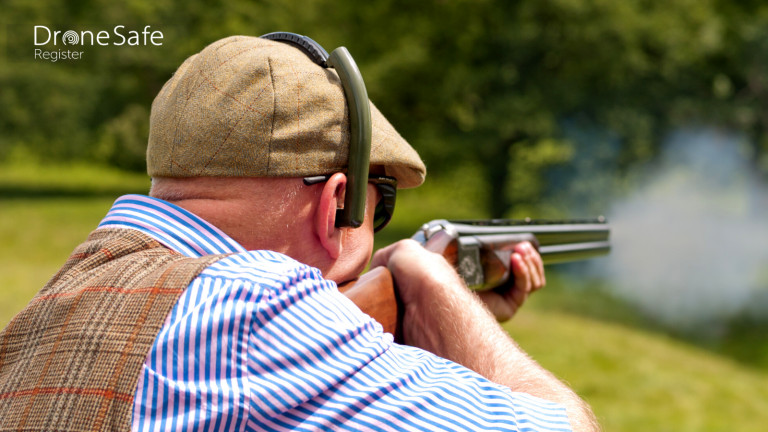 Can I Shoot Down a Drone In The UK?

Is it legal to shoot down a drone that is flying over your property?

There can be an element of fear around drones at the moment, largely promoted by the media as nothing sells copies of their papers better than providing a target for worry or righteous indignation!

Our 5 useful links are below.

Learn about Drone Rules and Regulations

Report drone miss-use to the CAA

Who is your local legal drone operator?

How much do drones cost?

Of course, here at Drone Safe Register, we know that drones in the hands of safe and legal pilots have a great deal to offer to the public and we’re working hard to get that message across.  So, it’s a little disheartening to us when we get asked questions or read comments about whether it is legal to shoot down a drone that is flying over your property.

Still, it is a question that we are still hearing so we are going to tackle it head-on here.

You can’t shoot down a drone, even if it is flying over your house or land, not even if you are really unhappy with it being there.

There was a story in 2016 from Richard Madeley about how he was in his private garden and a drone was flying above him presumably looking to capture some candid images to make a profit from. Drone Safe Register would never excuse that behaviour and on a personal level, we can definitely understand the upset and frustration that this must have caused him, we were a little alarmed to read freely admitting in an article that he wrote for the Independent newspaper that he wanted to shoot it out of the sky.

‘I thought about fetching my .22 air rifle and shooting down the nasty little intruder. It would have been an easy one-shot snipe, and the robotic carcass would have fallen on to my lawn, but the words “criminal damage” whispered in my ear. Do I own the airspace above my property? Probably not. Did I want to be the party that the police took in to for questioning?’ – Richard Madely

He chose instead to try and track down the pilot and, although we wouldn’t advise confrontation either, the pilot chose to hand himself into the local Police where he was given advice on the proper way to proceed.  There’s no doubt he was acting irresponsibly but if his drone had been shot down (and particularly if he was flying legally) he would have had a good case for criminal damage.

Do you own the Airspace above your Home?

cuius est solum eius esse usque ad coelum et ad infernos
“whoever owns the soil, it is theirs up to heaven and down to the depths”

Well, to answer the question specifically is probably no one does! The CAA as the regulator of the airspace is responsible for the ‘rules of the road’ and such rules are passed as laws by the legislator, to ensure that safety is always paramount. The airspace above my property question is really, where does my freehold property ownership start and where does it finish?

It does raise an interesting point on ownership of airspace.  If you own the property freehold, you also own some airspace above it, and this is your Air Property.  In Wales and England, this ownership does not extend without limit, however (if you are in Scotland land ownership runs ‘from the sky to the centre of the earth’).

The 1977 High Court ruling in the case of Bernstein v. Sky Views and General Ltd recognised to accommodate the demands of modern aviation that restrictions must be placed on the rights of an owner in the airspace above their land to ‘such height as was necessary for the ordinary use and enjoyment of his land and the structures upon it’.  Above this point, there is no ownership of the airspace although users must abide by the regulations laid out by the CAA (in the UK).

Supplementary to the ‘Airspace question’,  freehold property owners have a right to claim a portion of the airspace above their properties under the laws of “trespass” or “nuisance” if they believe their right in law to safe and quiet enjoyment is infringed.

Can you be Prosecuted for Shooting Down a Drone?

Drone laws are still in their infancy, certainly case law is and so at the time of writing, no one has been prosecuted for shooting down a drone.  However, this looks set to change after an incident in February 2019 in Kent.  A drone belonging to some hunt saboteurs was shot at by one of the huntsmen.  The drone, although damaged, was able to return to the pilot and the footage was recovered leading the Police to make an arrest and hold the suspect on a charge of suspicion of criminal damage and possession of a firearm with intent.  At the last update, he remains in custody and we will be following the story with interest.

What to Do if there is a Drone over your House

If shooting down a drone is out of the question (and it definitely is), what action can you take?

You cannot shoot down or damage a drone, even if it is flying over your house or land. You could be charged with 'endangering an aircraft' and face a harsh prison sentence.

The first thing that we would like to stress is that a drone can legally fly over your house at a height of over fifty metres (50m) and so the fact that you can see one in the sky doesn’t necessarily mean that it is breaking any laws when being flown by pilots with commercial permissions.

The second thing which is just as important is that a drone over your property does not mean that you are being filmed or photographed.  From the ground, it is very difficult to tell in which direction the camera is pointing and there is almost a certainty that a drone pilot is filming something else entirely.  To get a specific ground subject in the frame the drone will most definitely have to be some way back.

In the case of a commercial drone pilot, it is not in their interest to break the laws with their livelihood at stake. All flights are logged and can be inspected at any time by the CAA using legal audit powers, who can also remove a drone operator or pilot’s permission to work commercially.  A professional UAV operator (and that applies to all of our Drone Safe Register members) will not waste any battery time taking pictures of something that is not part of their brief or outside of their flight plan.

We can however understand that it can be upsetting if you see a drone flying over your property when you are not expecting it to be there.  If you have concerns, you need to call 101 – the non-emergency police number.  Most commercial pilots will have logged their flight area and contact details with the relevant police or local authority and so they will be able to reassure you if it is already on their database as a planned flight.  If it is outside of this, then they will investigate as necessary.

Interfering with a drone in flight in any way can have serious consequences both for you and potentially for the people and property around you.  Hopefully this article has gone some way to reassure you that the vast majority of drone flights are for legal reasons, will not infringe your privacy rights and can offer great benefits to business and domestic customers for any number of reasons.

If you are concerned about drone activity above your property or indeed anywhere else, don’t try to interfere with the drone or confront the pilot, just call 101 and report it.