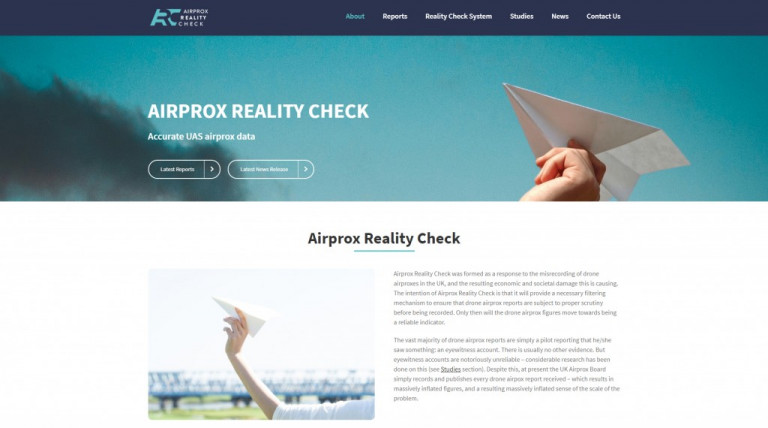 Are Government and the Media Responding to Misinformation?

Well the answer is clearly – YES!

A recent request for data under the Freedom of Information Act was made to the UK Airprox Board (UKAB) by the Airprox Reality Check Organisation and the results are causing quite a stir within the drone industry.

The information requested was the amount of airprox incidences where there was proof outside of the report itself that a drone has flown close to an aircraft in UK skies and the answer was a resounding zero.

This revelation flies in the face of much public perception that drones present a real and significant danger to the commercial aviation industry.  The December 2018 Gatwick Airport closure and the recent legal changes regarding drone flights near airports, have combined to give an impression that drones are a more prevalent threat to aircraft than has proved to be the case. Most drone pilots have always been aware that reports of drones sighted at unrealistic altitudes and speeds are almost certainly bogus but this categorical response by the UKAB is a welcome additional factual tool in the fight against increasingly negative public opinion.

‘We welcome UKAB’s admission as we work alongside our members to promote the incredible benefits that drones have to offer both commercially and for leisure purposes.  We are often worried to hear the reports from our members about the level of hostility that they can face from members of the public while they are simply going about their legal business.  This negativity has been fuelled by the media in many areas and we are always grateful to be able to showcase some facts that contradict biased and opinion-based reporting.’

Simon Dale of Airprox Reality Check (who requested the information) is also happy that the official response corroborates his organisation’s standpoint.  He states that, as these unproven reports have been used to drive through legislation as if they were facts, this new information should be given equal weight in the corridors of power.

‘The Government is mid-way through introducing legislation based on this now discredited data.  Given that this it is now clear that the drone airprox reports are entirely unproven, and in the vast majority of cases, entirely bogus, the Government must recognise the huge mistake it has made, and cancel the proposed regulations before they do irreparable hard to the drone industry, model flying community, and, in the longer term, the whole aviation sector.’

About UK Airprox Board (UKAB)

UKAB has as its primary mission the enhancement of air safety.  When a pilot or any member of air traffic services personnel feel the distance between aircraft relative to their speed and position and compromises safety, UKAB is where they log their concerns.  Funded equally by the CAA and MAA, it isn’t suggested at all that UKAB reports are fulfilling anything other than their goal of collecting as much data as possible.  Indeed, in all reports the ‘language of blame’ is avoided to encourage open and honest reporting with the emphasis of identifying lessons that are of benefits to all airspace users.

Following a reported incident, pilots and controllers receive a copy of the full report alongside safety recommendations where appropriate.  UKAB’s findings are compiled annually into a report that analyses airprox numbers, rates and trends.

When you look at the monthly airprox reports, the object is stated as ‘drone’ in a worryingly high number of them.  This is where Aiprox Reality Check believe that they have a host of valid points to raise.

Airprox Reality Check (ARC) was formed as a response to what they saw as misreporting of drone airproxes in the UK.  They have three strands to their mission.

They are working for the benefit of the drone industry as a whole and in recognition of the economic damage being caused to drone pilots by what they see as a lack of proper scrutiny of these airprox reports.

ARC apply a series of filters to each report regarding a drone.  There are thirteen filters in total, designed to examine the situation as reported from looking at who made the report, through any corroborating accounts or photographic evidence, and including altitude, weather and location information.  Each filter carries a weighted score leading to a total and calculated likelihood as to whether the incident was indeed drone related

Cause: The drone was being flown above the maximum permitted height of 400ft and within controlled airspace such that it was endangering other aircraft at that location. The Board agreed that the incident was therefore best described as the drone was flown into conflict with the B777.

Risk: The Board considered that the pilot’s overall account of the incident portrayed a situation where providence had played a major part in the incident and/or a definite risk of collision had existed

This is an eyewitness report from the aircraft flight crew only. There is no corroborating evidence. No photographic evidence. The likelihood of encountering a drone between 6000ft and 9000ft is infinitesimal, as DJI products (75% market share*) feature a 1,640ft (500m) hard height limit and Yuneec products (second largest market share with 5%*) feature a hard 400ft (121m) height limit. (Most of the drones in the remaining 20% are toys which would be incapable of reaching this height or racing drones which are flown within a few feet of the ground.) It would also require the drone pilot to be willing to fly the drone illegally above the 400ft legal height limit. Furthermore, the technical limitations of battery energy density / mass would mean that any drone that was able to reach these heights would have a very short loiter time – less than two minutes at 6000ft. No consumer drone could reach 6000ft in real world conditions. The description is of something unlike a multirotor drone.

As you can see form the above comparison, reports made from the same information are producing quite different conclusions.  The scientific nature and specialist knowledge of the ARC board and filter system means that, at the very least, this cannot be dismissed as self-serving propaganda for an industry standing in the court of public opinion. In fact, the lack of reports form ARC where the incident has scored in the ‘likely’ or ‘very likely’ category must lead a viewer to wonder whether stating ‘drone’ as the object has become a convenient shorthand where ‘unknown object’ would have previously been used.

It is certain that there is no airspace user who would wish for anything other than the highest safety standards and most thorough investigation of any incidence that could potentially pose a threat to safe airspace sharing.  However, reading through recent report analysis by UKAB, it does seem as though there is a worrying lack of attention being paid to the limitations of drones, particularly with relation to speed and altitude.  Where the speed and height of the reported incident means that a drone physically could not have been involved, these would need to be attributed to some other kind of craft than a UAV.  Where these reports are being used to fuel the fires of ‘drone fear’ and to inform legislative decisions, Drone Safe Register fully supports the work that ARC are doing to try and bring a measure of balance into the equation.

So clearly there is a huge amount of misinformation around and if that wasn’t enough, it has also been highlighted recently that the number of Police recorded “Drone Related Instances” have increased significantly in recent months and years. However, the Police have stated that when Commercial Pilots call in their planned flights as a courtesy report, that these calls are being logged as ‘Drone Incidents’ without any clarification in the data that they are routine calls to simply make the Police aware should they get a call from the public. This is the data that the Media often seek and refer to when writing stories about Drones.

Clearly the analysis on Drone related issues is bogus and misleading and all those responsible for data collection and reporting should be looking closely at their systems and data management processes.

We would encourage Simon at the Airprox Reality Check to continue with his endeavour and maybe find time for a Freedom of Information request from the Police on how they are recording Drone Related Incidents?