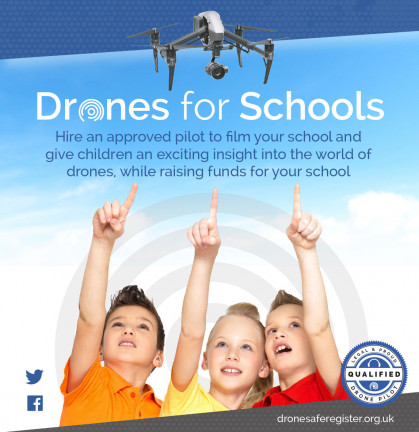 This is DSR's latest initiative aimed at spreading the message of drone safety to the UK’s younger generations and perhaps the drone pilots of tomorrow.

DSR is the UK’s leading drone hire website. We have nationwide coverage and some of the best drone pilots available for hire in the UK. All our members are CAA registered and fully insured professional working drone pilots. Our members are working on all manner of aerial imagery jobs in many sectors of the nation’s economy.

Recognising that our members have a wealth of knowledge and experience of working in the UK’s drone industry we thought it would be great to inspire younger generations by introducing them to drones, drone safety and what drones are capable of in the right hands!

DSR this week, launched their new initiative called ‘Drones for Schools’, aimed at introducing drones to school children. The idea stems from the fact that drones in the right hands create lots of benefits both in the workplace and for leisure. But drones are not toys! Anybody controlling a drone must remember to fly safely and follow the drone laws set by the UK’s Civil Aviation Authority (CAA).

So that’s why DSR launched the new initiative; because it’s great for our DSR members to inspire younger generations, convey their knowledge and instill safe drone practices to perhaps the drone pilots of tomorrow. What’s more our drone pilots get to pass on their creativity to schools by providing them with some stunning aerial photos of the school and pupils! It’s the perfect visual memento for the children, parents and pupil’s families!

To kick start the initiative earlier this week, Jessica Jay and the Drone Safe team joined DSR member, Jerry Laurence, of Brighton Sky Cam who introduced drones to the school children at All Saints C.E Primary School in West Sussex.

All Saints CE Primary School hired professional pilot Jerry Laurence to provide their pupils with an introduction of drones and their safe use. The fun packed day was also a chance for the children to learn the important safety practices associated with drones. Some important take home safety messages were raised. It also enabled the children to take a close look at some of the high-tech drone equipment being used by drone pilots today.

After the drone presentation, the school children gathered in the playground and drone pilot Jerry took a series of aerial photos of the entire school, all the pupils and staff. The various photographs were then given to All Saints to print off and the children’s parents were given the opportunity to purchase if they wished.

Drones are already revolutionising the way we do business in the UK. DSR believes that the safe and responsible use of drones can bring significant benefits to the UK as a whole. It’s a positive thing to be able to introduce drones to school children and inspire future generations to perhaps become the drone pilots of tomorrow. 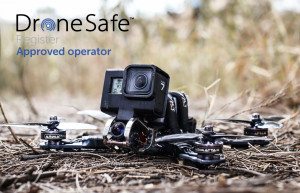