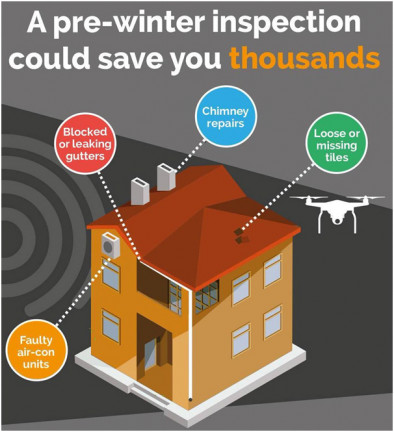 Our members offer a non-contact temperature measurement across areas that are hard to access or view from a ground based perspective.

If you’re on this website then you already know at least a little about the drone’s ability to create aerial photography and videography.

However, did you know that they can also be fitted with thermal cameras to add a whole new dimension to property inspection?

State of the art thermal cameras offer a non-contact temperature measurement across areas that are hard to access or view from a ground based perspective.

As with all drone inspections, the health and safety risks associated with working at height are minimised. The risks of causing damage to the structure through the inspection process itself.

With UAV-borne thermal imaging cameras, real time temperatures are recorded both quickly and accurately with the resulting heat map images being able to provide temperature measurement at any given area.

Qualified Image analysis and reporting can identify potential problem areas that would have remained hidden to the naked eye until serious damage had occurred.

how much will it cost?

Thermography can be a useful tool in many areas…

Drones can be used to inspect the functioning of solar panels during the summer months â€“ either those that form part of a commercial installation or solar farm or those on the roof of a private property.

Defective cells may be found individually or as a group/string whereas a defective converters will appear as a single hot spot  that does not fit the cell layout pattern.

Malfunctioning solar cells can create further damage such as melted solder connections, cracking of the protective glass cover and degradation of the adjacent cells.

Therefore, early identification can help to minimise repair bills as well as to keep the solar panels functioning at maximum capacity.

Problems are immediately apparent when looking at the thermal images gathered from a drone flight so target repair teams can be deployed address the issues raised specifically.

This is another type of inspection suited to drone thermal imaging, that is conducted in the summer months when the solar radiation from the sun will heat the area such as a flat roof and its substructure.

The water inside the structure (if there is water ingress) will retain its heat for much longer than the substructure itself so when inspected as the exterior temperature starts to cool at the end of the day, water ingress will show as an area of increased temperature.

This can be detected and corrected before interior damage occurs.

Insulation continuity may have been compromised during the design or construction stage of a building’s life cycle.

Alternatively, damage may have been caused later in its existence, particularly when older materials have been used.

Insulation surveys are usually conducted in the cooler months of autumn and winter where it is easier to obtain the difference between internal and external temperatures (10 degrees or more) that are required to make clear areas of heat loss and thermal bridging.

In all cases, a simple non-invasive drone flight under the right conditions by a qualified thermal drone operator can be all that is needed to identify hidden problem areas.

Just use the search facility on this website to find your nearest qualified drone pilots and request quotes for your thermal inspection work.

get a quote today