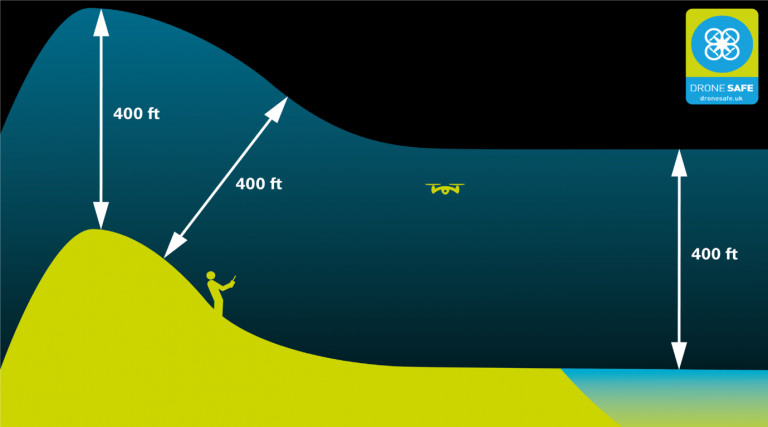 This is the second part in our series designed to explain some of the basic principles about hiring a drone operator and the standards they have to meet in order to fly safely and legally.  In particular, we’ll be looking at the distances that a drone pilot must keep to as this is something that you’ll often hear talked about and can be a bit confusing. 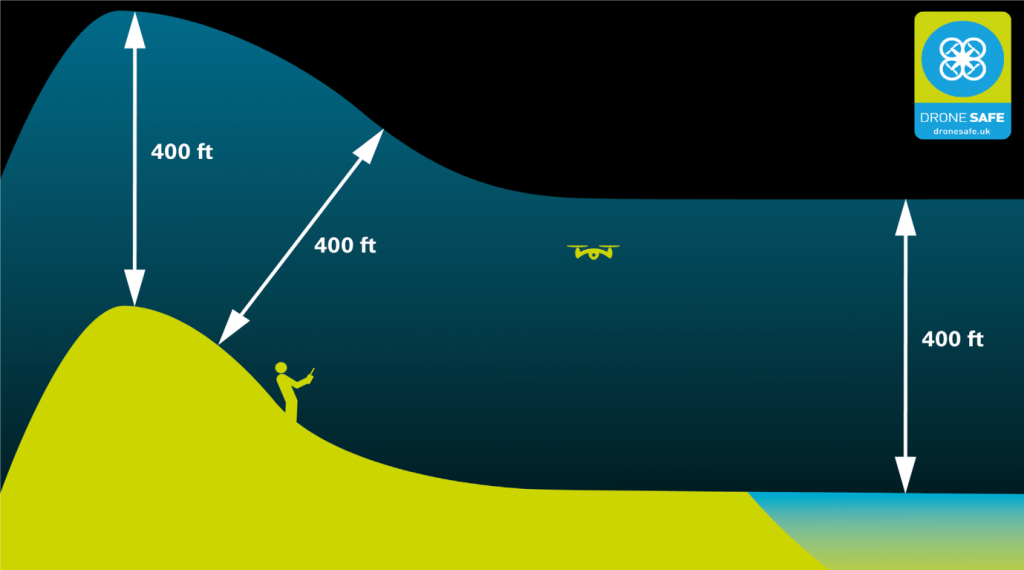 Maximum Height that a Drone Can Fly

So a drone may only fly up to 400 feet about the ground, that’s 120 metres.  This is to keep it under the level of most manned aircraft and to minimise the risk of conflict there (although some military aircraft and helicopters can fly lower and so there might be further restrictions if you’re in an area where either of these is likely to occur).  This maximum height is measured above the ground and not above sea level and so if the height of the terrain varies so does the maximum height of the drone.  The CAA’s Drone Safe Website have an excellent diagram to show you exactly what they mean which is below.

Being Under a Drone Pilot’s Control

This part is the key to understanding a lot about drone flights as a drone pilot must look to keep a safe distance from people, structure, vessels and vehicles that are not under their control.  Basically being ‘under the control’ of the drone pilot means that someone is either there solely for the purpose of the drone flight or that they have been briefed and can be reasonably expected to following instructions and safety procedures to avoid any accidents occurring.  So, for example, a member of staff who is there to allow a drone pilot access to an area for a flight would be under their control but spectators at an event would not be as they are not there just for the purposes for the drone flight and would not have been briefed on the proper safety procedures.  A more common example would be if you had hired a drone pilot to take a house portrait and they would be flying near to your neighbours, if your neighbours had been briefed on the safety procedures and were aware of the drone flight date and time, they would be under your control.

This is where the ‘under the control’ part comes in.  The law states that a drone pilot must keep 50m away from people, structure, vessels and vehicles that are not under their control (unless this is an event with more than 999 people in attendance in which case the distance is 150m).  During takeoff and landing this distance is reduced to 30m.

This distance is applied like a bubble and the easiest way to visualise it is to imagine that there is a 50m (or 150m) piece of string attached to the bottom of the drone. If at any point, this piece of string can be stretched out in any direction to reach a person, property, vessel or vehicle that’s not under the control of the pilot then it is too close.   Above and outside of this distance, a drone pilot can fly (with the caveat that they are always flying safely) as no one actually owns the airspace.  So a drone doesn’t need permission to fly over your garden at a height of 51 metres according to aviation law (there’s a whole different set of laws regarding privacy which we will cover in a separate post).

Interfering with a drone, trying to remove it from the sky by whatever means, as well as being potentially dangerous for you and other people is against the law and could see you being prosecuted and so if you have concerns, the action to take is to call 101 and report the activity.

All DSR pilots act according legal requirements and best practice standards which will usually include courtesy information being passed to anyone who is likely to be affected by a drone flight and also informing the relevant police authorities of the flight path so that they are able to advise any members of the public who ring in with concerns.

There is no restriction on distances that must be adhered to where people, structures, vehicles and vessels are under the control of the pilot so in theory a drone can fly as close as is required although the requirement for ‘safe flight’ would still apply.

Exceptions to the Rule

The distances we’ve just talked about above are the standard Permissions for Commercial Operation (PfCO).  Some pilots will have applied for special permissions and distances to allow them to work in congested areas and these are called an Operating Safety Case and are specific to each pilot. To obtain these, they need to put in place a set of safety measures that the CAA are satisfied will allow them to fly closer and still operate safely. For an example, they may need to have extra members of staff to act as ‘spotters’ or observers.

What does this mean if you’re Hiring a Drone Pilot?

These laws will apply to a drone pilot who is operating legally which obviously would include any member of the Drone Safe Register Network.   So if you are looking to book a drone pilot for whatever reason, they will need to assess your requirements to ensure that they are flying according to  these standards.

That doesn’t mean that you can’t use a drone if the flight will cross these 50m / 150m boundaries but the pilot will need to assess the situation and take the necessary actions to make this safe.  This might well require extra planning time for example if additional people need to be informed of the flight, or incur expense if extra staff are required.

Understanding about the legal distance requirements can help to explain why a pilot has so many questions about the work that you want carried out when you get in touch with them before they can give you an estimate.  All of our DSR pilots would love to help you to achieve your aerial photography and videography goals but they need to make sure that everything is being carried out safely and legally at all times.