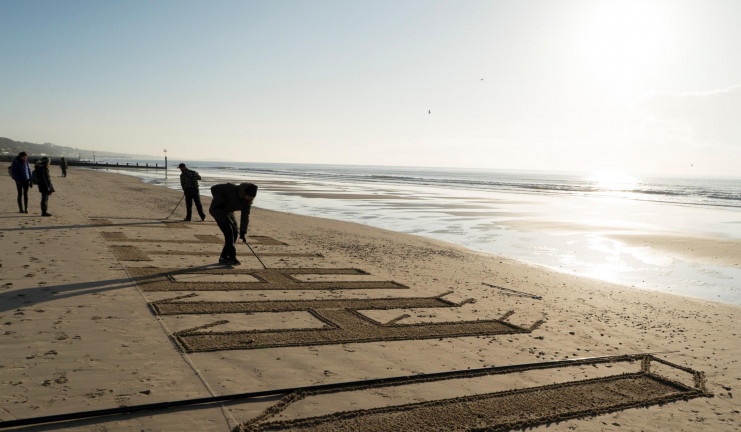 Movie quotes were written in the sand on Bournemouth Beach yesterday to celebrate 50 years of Bournemouth Film School.

A group of around 10 Visual Communication and Graphic Design students from the Arts University Bournemouth (AUB) were joined by staff and alumni close to Bournemouth Pier to make the most of the bright sunshine while drawing the giant lettering.  They used garden rakes and other tools to drag up the sand and create the patterns on the seafront as people walking along the promenade looked on.  The aim, said Professor Stuart Bartholomew CBE, principal and vice chancellor of AUB, was to highlight the success of the students who have gone on to work on some big blockbuster films including Spectre, Star Wars: The Force Awakens and Gravity.

“Key to this longevity is the underpinning ethos of AUB’s learning and teaching, which is creatively driven, vocationally focused and supported by state of the art equipment and facilities.”

He added that Bournemouth Film School began in the 1960s and has gone on to become the UK’s largest film school outside of London, with an international reputation in the film industry.